David Mason is an Ojai cellist available for weddings, parties, and other events in Ojai, 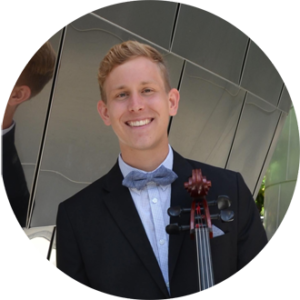 David has performed at Royce Hall, the Fox Theatre in Riverside, the Granada, Carnegie Hall, and is a section cellist of the Bakersfield Symphony Orchestra. He keeps busy as a chamber and orchestral musician and performs with several professional level string quartets in Santa Barbara and Los Angeles. David has performed with artists such as Burt Bacharach, the Corona Pops Orchestra, Michael W. Smith, and Vinnie Ferra. David was featured as a soloist in the score of documentary film With Great Power: The Stan Lee Story which was recorded at Capitol Records in Los Angeles.