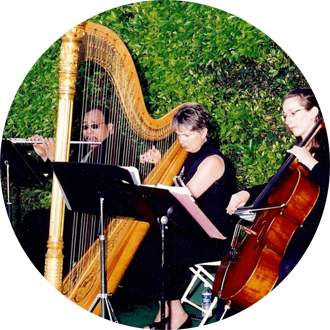 The Radford Players is a flute cello harp trio made up of the most highly professional musicians in the Los Angeles area. Our goal is to make your affair extraordinarily memorable. We are customized to perform for all events, including weddings, parties, and bar/batmitzvahs, providing any type of ensemble to suit the occasion.

Whether your affair is a large formal event or a small intimate gathering, The Radford Players can provide ensembles of different sizes and orchestrations to fit your motif and budget.


Vicente Pena (Founder/Director)
Founder and director Vicente Pena’s musical training began when he was quite young and he attributes his development to years of study with various Flutists and Professors in Los Angeles. His orchestral performances are vast. He has performed with the Glendale Philharmonic, Southeast Symphony, the Redlands Bowl Symphony, Marina del Rey/Culver City Symphony, the Los Angeles Jewish Symphony, Downey Symphony, as well as the Golden State Pops Orchestra, the Torrance Symphony, and the Carson Symphony. He is a Personnel Manager for various pick-up orchestras and was just appointed the Personnel Manager for the Southeast Symphony. He also contracts for many venues in Southern California.

Vicente is well versed in operas, musicals, and as a soloist at such noted venues as the Dorothy Chandler Pavilion and Disney Hall. He is a studio musician and has played on many recordings for up and coming artists and composers in Los Angeles. He is the founder and director of The Radford Players, coordinating and performing chamber music for various personal and corporate events.