Formed in 2009 in Santa Barbara, California, Kalinka plays a rich mix of 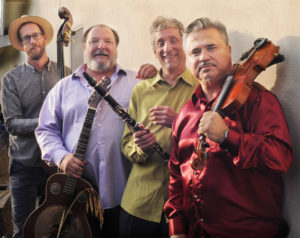 Fred Nadis (Clarinet)
Fred is one of Kalinka’s original members, is an author and historian, a student of Klezmer music, a member of the UCSB Middle East Ensemble, and an aficionado of Turkish, Greek, and Romani clarinet players.

Eric Ederer (Acoustic Guitar/Oud)
Eric has a Ph.D. in Ethnomusicology from UCSB; he is an expert on Turkish improvised music. In addition to guitar he plays oud and traditional stringed Turkish instruments, and performs with the UCSB Middle Eastern Ensemble.

Daniel Moltke (Violin)
Daniel is completing his undergraduate degree at UCSB, is lead violinist with the UCSB Middle Eastern Ensemble and a marvel to listen to.

Andrew Fedders (Bass)
Andrew is a professor of Education at the Gevirtz School at UCSB, has played bass with local favorites such as Oso, before joining Kalinka three years ago.