Juan is a classical guitarist and tenor singer who has been performing in Santa Barbara and all over California for years, regularly at venues such as the Bacara, Biltmore, Fess Parker, Canary Hotel, Firestone Vineyard, Sunstone Winery, Gainey Vineyard, Foley Estates Vineyard, and many others. He has also performed at the 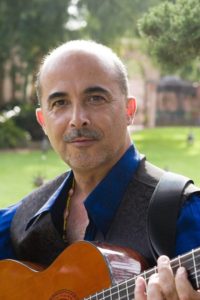 Pascucci Restaurant in downtown Santa Barbara for 12 years and many other venues throughout California. He performs as a soloist, duet or with a full band, specializing in the Gypsy Kings, Andrea Bocelli, Beatles, Bossa Nova, both as a vocalist or providing instrumental background music for weddings and other events. He has played classical guitar for numerous weddings, specializing in ceremony and cocktail hour music. Pieces he has performed include:

Juan is happy to learn special requests for your event.

“Just wanted you to know that the guests loved Juan’s music! They were telling me how much they enjoyed it. It was perfect for the wedding! Again, thank you so much for sharing his beautiful talent with us! His guitar playing is incredible!” – Karen